This week, I’m writing a rebuttal to my own post (So Just What IS Wrong with Your Son?). I got a lot feedback last week, it just wasn’t what I expected. I really appreciate the love and support, but I think my message was misunderstood.

First, yes. I have actually been asked that question plenty of times. Yes, sometimes even by complete strangers. It is not usually offensive (except when it’s complete strangers.) Usually it’s a friend who knows there is more than just autism and they want the whole story.

That was the point of that post. I wanted to paint the whole picture. It’s weird to me when complete strangers ask (which hasn’t happened in a long time) because it’s hard to see that there is anything off with Yoshi.

That’s why it is a little offensive when a stranger asks. It usually means he’s done something that they didn’t like. It’s kind of like yelling, “What are you doing?” when your kid is doing something that you want them to stop. You know what they’re doing, you just want them to realize they need to stop. These strangers are not asking because they expect an answer. They’re trying to tell me that he’s acting inappropriately.

It’s okay, though, because when I get to tell these people that there actually is something “wrong” with my son, they get pretty embarrassed. Yes, you impolite person, there is a reason that he is acting like that. I’m not sorry that you don’t like it.

But you are all correct. There are far more things not wrong with Yoshi than things that are. Today I would like to share some of them with you. Kids with HFA tend to have exaggerated character traits—good and bad. It’s what makes them such amazing people. The good things about them are really good.

It’s what makes them such amazing people.

Yoshi is friendly and remarkably engaging for an autistic child. It started with social scripts and grew from there. Last year he had an incredible teacher that worked hard with him, teaching him how to interact well with others. Yoshi does very well with rules and when he “learned” that it is appropriate to say hello and introduce yourself, well, that is what he does.

He is caring. You would not believe the size of this kid’s heart. Sometimes it’s hard because this huge heart breaks hard, but it makes him such a loving and empathetic person. He does not always know when someone else is hurting because he has a hard time reading faces and hearing vocal cues, but if you tell him he will douse you in love.

He is already in love. It’s adorable. He has had a friend since junior kindergarten and since they have been friends for so long, he just assumes that they will grow up and get married. We were at a hotel last summer, watching TV while we ate dinner—just the two of us. This meant live commercials (something we never do!) and one for match.com came on. Yoshi said, “Sorry, Match, I already have a wife lined up.” I said, “You do?” He said, “Yeah, [this girl]. It makes sense. We’re already BFFs.”*

He is self-aware. Yoshi knows that his behaviors are annoying to others and that helps him to be more conscientious about his surroundings. If you ask him to leave the room, he is quick to go and does not get upset. He apologizes. It helps others handle his compulsions when you know that he doesn’t want to inconvenience others, he just can’t help it. Last December he told us, “I’ll probably be more popular with the ladies when I learn to chew with my mouth closed.”*

He is honest to a fault. This is kind of a double-edged sword. It’s nice to be able to trust everything that comes out of his mouth, but he has no filter, so whatever he thinks about you… you’re going to know. He will tell you if your butt looks big in those jeans. 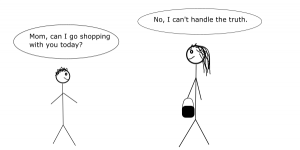 He is brilliant. I’m not just saying that as a proud mom. He is objectively brilliant. One of his favorite things to do is to share all of his knowledge with other people. That, of course, means that he sometimes talks for hours on end about something that you may not find even the slightest bit interesting, but it’s another way that he is interacting with people. Yoshi also has an unquenchable thirst to know all the things. Once he has a tiny bit of interest in something, he barely rests until he has researched it thoroughly.

He is funny. I don’t know how to pick just one humorous anecdote to share with you. We have so many. Yoshi isn’t always trying to be funny, he just has a deadpan delivery because he is being perfectly honest (remember?) and that is often hilarious. He also does not understand sarcasm (another double-edged sword) which frequently ends in comical misunderstandings. A literal outlook on life and a deadpan delivery—he could be a stand-up comedian.

Last spring, right after the Night to Shine RVA (a special needs prom event in Richmond) we were talking about special needs kids getting to go to prom or dances in high school. I started saying to Big Brother, “If you’re not in a relationship with anyone, if you don’t have anyone to go with and you have friends that are going—” and Yoshi interrupted me with, “You should tag along and go as a third wheel,” without a hint of humor in his voice. I still don’t know if he was teasing his brother or offering genuine advice.*

The list goes on. Yoshi is amazing. Yeah, he’s quirky. But he’s a fighter. God dealt him a tough hand and he keeps playing. It’s hard to know this kid and not love him, even the hard-to-love parts.

*One of the few things I did right as a mom was to keep a journal of the cute and funny things my kids say. It’s a treasure trove of laughs and warm memories, also a great resource for this blog, apparently.