Water is one of the most imperative human needs. It’s also one of the most deadly forces in the world. We’ve seen it a lot in the news lately: the devastating effects of hurricanes (stateside) and for those of you who do global news (I don’t) typhoons and tsunamis make me grateful to live where I do. Flooding, droughts, water has the power to destroy our way of life. 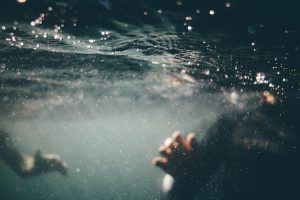 When you have a baby, people tell you to be careful because it only takes a tablespoon of water to drown—or something. I can’t remember exactly. The point is that when you come home from the hospital, you know not to ever walk away when you are giving your kiddo a bath. We put on lifejackets when we go on boats. We watch them at the ocean. Don’t run at the pool!

This past summer, one family learned the hard way that we aren’t warned enough about the risks surrounding water and children. I highly encourage you to read some of the posts the mom has written about her tragedy. Most drownings occur when we aren’t “at the pool” or expecting to find our little ones in the water. We let our guard down.

It’s impossible to anticipate everything. Maybe that’s why people don’t spend more time pressing upon parents the dangers of water when you’re not expecting it. You can’t prepare for what you can’t anticipate. It’s especially hard for families with autism.

Water is terrifying. We’ve had Yoshi in swim lessons practically his entire life because we know that autistic children have a high risk of dying from drowning. I’ve mentioned before that it’s hard for him. If he’s out of the pool for even a few weeks, he forgets how to swim.

There must be something about the water that calls to them.

In three of the last ten years, 91% of the total U.S. deaths reported in children under 14 with ASD were caused by accidental drowning (subsequent to wandering or elopement) and 32% of parents reported a close call with drowning. (source) It’s the leading cause of death in children with autism.

There must be something about the water that calls to them. We know that elopement is a problem, but why are so many of them drawn to the water? Teaching them to swim is difficult. When you want them in the water for swim lessons, they fight; when you aren’t there to keep them safe, they jump right in.

It’s something people are aware of and are trying to combat. A friend of mine started a swim program especially for autistic children at the YMCA. The program is called GRACE Swim Lessons and she has worked hard to make it a success: petitioning for grants, organizing fundraising, coordinating with staff. Our Y offers the lessons for free to children with ASD. I wonder if she’ll even know how much it means to parents like us?

We do our best. Project Lifesaver and others exist to help locate autistic children when they have gone missing, but drowning happens quickly. We can teach them to swim, but Yoshi has known how for years and I’ve seen him need to be rescued more than once, and one of the times was in water shallow enough that he could have just stood up. 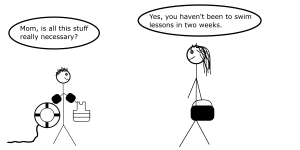 Yoshi has had several brushes with death. I blame myself for almost all of them. (Okay, all of them.) People try to assure me that they weren’t actually my fault, but I know in my heart it’s true. If I had only been stronger during my pregnancy, if I had pushed that doctor harder, if I had gone with my gut when I knew that other doctor was wrong—that kind of thing.

The worst one of all, the closest he’s ever come, was 100%, without a doubt, my fault. It was careless parenting. This was years ago, at a family gathering at my aunt’s house. My family is huge and loud. We were overflowing the house onto her patio and the kids were in the pool. I was sitting at a table right next to the pool, talking and visiting with family I don’t get to see often.

My baby walked off the edge of the shallow end—and I didn’t notice. I didn’t notice. Theoretically, he should have been able to swim back to the side or to where he could stand again. But he didn’t. He added us to that 32%.

I didn’t notice. He would have drowned if his brother hadn’t saved his life. Thankfully, he noticed something was wrong and yelled for me. Big Brother became a hero that day.

All water became terrifying for me.

Drowning is silent, my friends. And scary. My little boy was bobbing a bit just under the surface of the water, the crown of his head occasionally breaking free. The image is seared in my mind forever. It still wakes me in the middle of the night sometimes.

I jumped in the pool, fully dressed, and scooped him up (of course.) He coughed up the water without any assistance before he started screaming. I don’t like to think about what would have happened that day if Big Brother hadn’t been paying attention. I don’t like to, but I do. All the time. It’s by far and away my worst mom moment.

Yoshi wandered, though not as bad as some. That’s a post for another day. After witnessing him nearly drown, elopement became one of the worst parts of ASD for me. It’s scary. It happens so quickly. And my kid could (theoretically) swim.

All water became terrifying for me. I hate the ocean to begin with so my husband is always the one to take the kids out and I watch from the shore. Yoshi is always in a life jacket, but if he is more than an arm’s length away from his dad, I start to panic. I don’t have to imagine the “what if” anymore. I’ve seen it for myself, first hand.

Stay tuned for more ways that water changed our lives. To have future posts delivered straight to your inbox click here → Subscribe

*A couple of things: 1. I didn’t think my husband was going to be able to find any humor in this post to make a comic. I’m impressed. 2. I’m sorry for the huge delay in this post. I participated in NaNoWriMo this year (National Novel Writing Month) and it took up a lot of time! I didn’t have a chance to write anything during November.