This is not the kind of life that you measure in big victories. I have two children, one that is walking a more typical road and one that is… not. I know what it is like to celebrate milestones—and ache when they are missed. 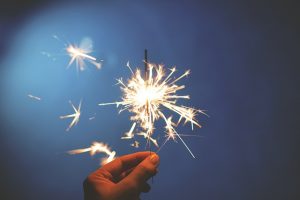 If we lived our “second” life waiting to meet the normal marks, we would be sorely disappointed. For his first couple of years, most of the therapists and specialists pointed out all of Yoshi’s missed milestones. We didn’t celebrate his achievements, we counted his failures. There were things that I didn’t even realize were missing—maybe I didn’t know he should be able to do it, or maybe I just didn’t notice that he wasn’t.

Once we had catalogued everything that was missing, as his parents, we began to look to the future. When could we expect him to catch up? When would he walk? Would he ever talk? What kind of timeline was reasonable?

My niece learned to tie her shoes in a few minutes with my nifty trick. She was so proud of herself. My brother and his wife were excited. It was great! But part of me couldn’t help feeling disappointed.

Yoshi, who is a few years older than his cousin, had been working with that same trick for almost a year and he still couldn’t tie his shoes. Our first victory with his shoes was being able to hold the laces with his fingers. Well, that was our first win with shoe tying. The first one with his shoes was the day he could finally put them on his feet without assistance.

To this day, I feel a little sense of pride every time I see my niece tie her shoes. That’s nothing compared to what I feel when Yoshi ties his. It took four years for him to learn, but he did. That was a huge victory!

Can you imagine waiting four years for that? If we didn’t celebrate, really and truly get jump-up-and-down excited, for the little parts along the way, how could we expect Yoshi to not get frustrated and quit? (How could I not get sick of trying to teach him?!)

Yesterday, Yoshi learned to button his pants!! This is so big, I can’t find the words. It seems like another huge victory in our house. That can’t be right.

Tying shoes is a pretty big achievement for all kids. All parents are excited when they learn to tie their own shoes, if only because it means we don’t have to do it anymore. It marks a little independence. It’s almost a rite of passage.

Learning to button pants is not a big picture win. It’s not even the final he-can-completely-dress-himself-now step because he still can’t do his shirt buttons without a little assistance. Why does it feel like such a huge victory? 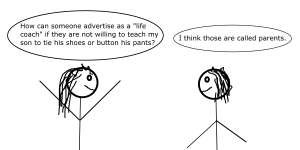 I don’t know if I can completely answer that. He can go to the bathroom by himself at school now. That’s a big deal. The logistics of figuring out how he was going to use the bathroom when he could not button his own pants was an enormous headache. Maybe I’m just excited that it isn’t an issue anymore.

I don’t think that’s it though. Maybe we’re just so accustomed to celebrating small victories that little ones seem big now. Maybe because this one gives him some independence (in the bathroom). The reason doesn’t matter.

Tearing apart your life into tiny bites is a good practice, whether you have special children or not. I do it all the time, not just where Yoshi is concerned. No one has to know that you are secretly celebrating backing into the parking space on the first try (before you even start to consider tackling the much bigger task at hand.)

For families with special children, it’s a must. You will get so bogged down if you focus on the big picture. The waiting, the disappointment of falling short, the time—your life runs on a different clock. There are always reasons to be dejected.

It’s all about the little victories. You’d be surprised how much it can turn your day around. For example, things have been really hard at work lately. (Ha! Really hard like the ocean is a little wet.) Suddenly that doesn’t matter anymore because my son can button his pants!

I don’t know about you, but we’re having ice cream to celebrate tonight. With sprinkles.