Skip to content
Posted on May 30, 2018Categories Autism, History

I’m not here to give you a poetry lesson, but if you are not familiar with Dante’s Inferno, the ninth circle of hell (the deepest) was considered to house the worst punishments. According to Dante, the traitors belonged at the bottom of the well with a special place reserved specifically for treason against your family.

Why am I telling you this? Because I have seen the ninth circle of hell. We lived there for months. And we got there by actions of my own hands. Treachery? Maybe not. But I definitely let Yoshi down.

Wow, Becka. You are dramatic. Oh, if you only knew. I promised last week that I would try to give you a glimpse of how bad this period of our lives was. I will try, I’m just not sure that I can do it in only 1200 words. 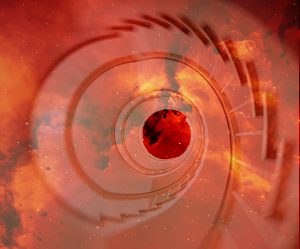 Yoshi started his medication journey in kindergarten. We settled on a stimulant before he got to first grade. In fourth grade we realized that he needed to come off of the medicine because—reasons.

The pediatrician explained to us that his brain was completely dependent on the medication for making dopamine. It would take at least six months before his brain would realize that it needed to start making it on its own and up to two years before it started to regulate itself.

We’ve already had a poetry lesson today, I’ll skip the physiology. Suffice it to say that his brain chemistry was going to be out of whack for a while and people need their brain chemistry to be in whack to act like normal, functioning human beings. Trust me. I’ve seen it in action.

The doctor told us to expect it to be really bad. She said that we would just have to wait it out, no matter how bad bad got. I talked to his teachers and they were very supportive, but we prepared for the worst. Literally, we were making escape routes. The few people I found who had been through it had few words of encouragement, “It will be hell. But it will get better.”

We timed it so that the first day he had zero stimulant in his system was the first day of winter break from school. That gave him two weeks at home to adjust a little before his teachers got him back. He was completely out of control.

I can’t explain epically awful in 1200 words. I thought that he was going to put his feet through the living room window during one temper tantrum. I had bruises on my arms from restraining him. My eye swelled shut one night after an encounter. I just got used to talking around a fat lip.

He had no qualms about sharing his displeasure with the world. He would scream at the top of his lungs, no matter where we were. He would run away from me in public places, or out of the house if we were at home, all the way screaming his head off—vacillating between incoherent screaming, obscenities, insults, and complaints.

I got a call or an email from the school almost every day. If Yoshi wasn’t with me, my cell phone had to practically be in my hand at all times. I would have to rush off to pick him up because he was throwing desks or they couldn’t get him to stop screaming. Yes, throwing desks. That happened.

I didn’t even recognize my own son. We had lost our sweet boy, who had always had a big heart and a kind soul. He was a demon that had stolen our Yoshi.

There were days that Big Brother was the only one that could calm Yoshi and he didn’t back down from the responsibility of having a special brother. But it was taking a toll. He retreated into himself. Big Brother’s grades plummeted. He started to cut himself off from his friends.

Everyone was stressed. We lived in crisis mode. Our nerves were just burned out. The whole family was angry all the time. We fought with each other. A lot. About all of the things and nothing at all.

Oh, the guilt I carried. As hard as it was for us, how bad was Yoshi feeling? I blamed myself for putting him on the medication in the first place.

It was a painful experience, both physically and mentally. I was so emotionally drained at the end of every day I felt like someone had wrung my brain out. I was exhausted but couldn’t sleep because there were too many thoughts racing through my mind. 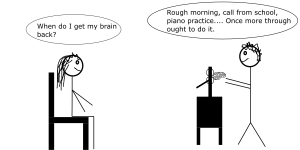 I couldn’t look at time as I had before. When family asked about our plans for holidays (“Easter is in just two weeks!”) I would laugh. I couldn’t plan. I wasn’t living day to day. I was living minute to minute. Anything further than the end of the school day might as well have been years away.

That was the only way to cope. “They” had said six months and I couldn’t think about how long that seemed. I could barely handle entire days. I was terrified that we would get to six months (that place where I had hung all my hopes) and he would not get better. It was better to just not think about the future at all.

Dealing with his meltdowns as they were happening took plenty of my brain power. We had other things to consider. Should we punish him for his behavior? Should we make exceptions knowing that his brain is burning in his skull?

We did punish, if you are wondering. Not as severely as we would have, certainly, if the situation was different. It was important to us that we not allow him to think that this behavior would ever be tolerated. We didn’t want to set a precedent or allow him to create bad habits that would stick around once he started to even out.

It added to the guilt. The punishments made no difference in his behavior (of course), it was just a statement from his parents. Maybe it wasn’t the best time to be making a statement. Add it to the long list of bad decisions I’ve made, if you disagree with it, but despite everything we still had to be his parents.

As his parents, we had to go through it. None of the horror mattered because it was necessary. When I couldn’t remember that, when I was crying and thought I couldn’t put one foot in front of the other anymore, my husband would remind me of this. We owed Yoshi the chance to succeed without medicine. This was a season and we would get through it. We had to. For Yoshi.

If you are facing this season, I will join the line of people in front of you telling you are about to descend through all nine circles. I’m sorry for that. But you will survive. You will do it for your child. And you will be better because of it. I promise. Do you have a story to share?

Facebook36TweetPin
Tags autismmedicationparenting
0 thoughts on “The Ninth Circle of Hell”