This summer we took a trip through a house of mirrors. Actually, we took several trips through. We struggled a bit the first time. It’s very disorienting. It turns out, if we had just let Yoshi go and followed him, we all would have been fine. 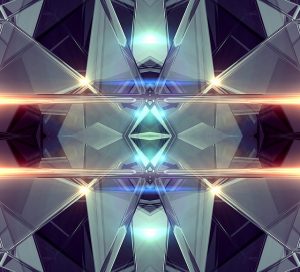 The second (and subsequent) trips through, I wasn’t as stressed so I loosened the reins a bit and let go (literally) of Yoshi. The first time I was terrified of losing him. When we let him lead the way, he zipped right through.

In a house of mirrors (or this one at least) they make you wear gloves so that you don’t get your smudge-y handprints all over the glass. It makes sense. It would take away from the illusion a little if you could see where you are going because you take the one way that isn’t covered in grimy, greasy prints.

Everyone walks with their arms stretched out in front of them, trying to prevent a faceplant into a glass panel. You’re not blind, but you kind of feel like you are. You can’t really see where you’re going. It’s a strange sensation. There are walls that you can’t see.

Except for Yoshi. He could see them.

When we let him go, he walked through that thing like he was navigating through our house. He just strolled right through. It was so… weird.

The third time, we wised up and just followed behind him so that we could stop bouncing off of the walls ourselves.

At first, we thought maybe he had just memorized which turns to take. But we had backtracked so many times and turned around (and in complete circles) that it didn’t seem like a very good possibility. So we just asked him. “How did you do that?”

He said, “I just took the one that looked right.”

Okay, it’s true, the “blank” space has slightly fewer reflections. If you look really closely, they’re slightly further away, or something. I don’t know because I can’t really see it that well, even after he pointed it out. It all looks like a kaleidoscope to me.

Then he said something that rocked us to our very core. “That’s what it looks like in my brain.”

My husband and I stopped and just looked at each other (we probably bounced into a mirrored wall.) He sees in kaleidoscope?! That actually explains so much. But it was still mind blowing.

It was impossible to not believe. We saw it first-hand. He walked through that maze, glancing around and taking the correct path and only putting his hands out when there wasn’t a blank space. (Sometimes there were corners and you had to turn completely around. It was really confusing.)

But how does he see the regular world like that all the time? What does that even mean? If that is really true, how does he get through his days? We kind of felt like it gave us some answers and insight, but at the same time it gave us so many new questions.

I realize that he probably did not mean that he literally sees in kaleidoscope all the time. Maybe he meant that is how his thoughts line up, or that things just repeat in his brain. I am never going to understand the way my son’s my mind works. I’m never going to know what it’s like for him in there. 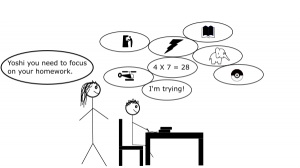 But of course he gets over stimulated easier than other people. It wouldn’t take much to tip the scale if that’s where you started. Everything that I learn about him teaches me how strong he is, how incredible he is.

People talk about “cures” for autism. There are promising new drugs or treatments in research that could eliminate it altogether. It’s an area that we keep an eye on, of course. It’s something that comes up in conversation in my house.

Yoshi can’t stand it. He doesn’t want to be “cured.” It upsets him for us to talk about it. I’m starting to understand why. He struggles, yes. He is different, yes. But can you imagine living your entire life looking out of a kaleidoscope and then one day having it taken away? It would be just as bad as having to learn how to suddenly start living your life looking through it.

This is Yoshi’s normal. He is comfortable in his head. He would have to learn how to live all over again. There is so much more to this disease than what we see on the outside. I think sometimes I forget that. It affects him in ways that I don’t see, in ways that I don’t know about and can’t understand.