When Yoshi was a bitty baby, everyone agreed that he was allergic to everything. It was easy. (Ha! Believe me.) As he got older the doctors stopped agreeing on anything and everything was difficult. The battles between the who, what, where, and why are for another day.

Eventually, we ended up at Johns Hopkins University Hospital with the Chief of Pediatric Allergy and Immunology. It’s kind of like escalating a case through the system and winding up at the Supreme Court. Our doctor literally wrote the book on food allergies. (He did. Food Allergies for Dummies by Robert Wood, MD)

In other words, we were in good hands. His decision—decision, not diagnosis—was that Yoshi was allergic to the “big eight”, or the top eight allergens: wheat, soy, dairy, eggs, peanuts, tree nuts, fish, and shellfish. Even after all these years I can rattle that list off in my sleep. 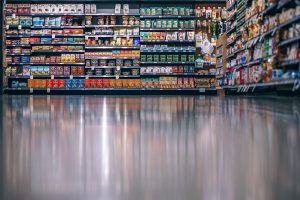 I guess I should clarify. My son was allergic to almost everything. He outgrew his allergies. Or he was never actually allergic. Or even the Chief of Pediatric Allergy and Immunology at Johns Hopkins couldn’t figure out what was wrong with my son and guessed. Or some combination of all three. I don’t know. But he eats whatever he wants now and we just battle the symptoms from time to time, though it’s becoming quite rare.

At the time we were operating under the assumption that he was allergic to the big eight. That’s a lot of things. Did you know that they put soy lecithin in almost everything that is processed and packaged? I don’t even know what it is, but it must be extremely helpful or tasty.

Wheat pops up in a lot of unexpected places too. Twizzlers, shampoos, and finger paints. I had a recipe for homemade wheat-free finger paint—what a weird thing to have to make—that had sugar in it. Yoshi pretty much just ate it. He didn’t get a lot of sugar in his diet so he loved to finger paint.

As a parent of a child with food allergies, you have to teach your child to be respectful of what they eat. If someone offers you food: check. Always check. If they’re not sure of what is in it, then you’re not sure what is in it. Don’t eat it. Period.

It’s a never-stop-worrying sort of problem for a parent.

We taught him not to eat anything, of course. But there was no way to know if those lessons worked. If Big Brother was around and someone offered them a treat he would react violently. (He was/is very protective of his little brother.) “Don’t give that to him! He can’t eat anything!”

People heard “just anything” when he meant “anything”. They would say, “That’s okay! This doesn’t have peanuts!” Here is my five-and-a-half-year-old arguing with an adult about his brother not being able to eat anything.

After I rolled out the list of his allergies, everyone always reacted the same, “What does he eat?!”

My response was always the same, “Not much.”

Autistic children typically prefer a rigid routine in their diets. That worked in my favor when my choices for Yoshi were limited to a sliver of a shelf in the grocery store and a very thin cookbook. We were thrilled to find even one brand that was allergen free. My shopping list was pretty much limited to that brand (Enjoy Life—find it in the natural food section), produce, and meat.

Sending him to preschool was hard. There was snack time to worry about, and any activities that they may do that would involve food—like stringing macaroni on a necklace. I made a point of having an extremely close relationship with the school and the teachers. Get involved. Know everyone. Talk to them every day. 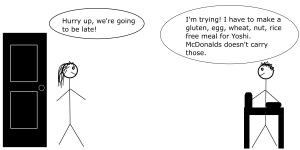 It became such a way of life it wasn’t even a pain anymore. Well, it was still a pain, we just didn’t notice. I got so used to it that I still do it now that he is a picky eater. He could eat what we are having for dinner, but he won’t and I end up making him his own meal. I’ve been doing it all of his life, why quit?

I’ve said it before and I’ll say it again: Feeding food allergies is difficult. Reading every label in the grocery store every time you buy something (because they’re always changing their products so you have to check!) You learn very quickly that things that shouldn’t necessarily contain eggs do, everything contains soy, pretty much everything contains wheat, milk is in more than you would think, peanut oil is used in places you wouldn’t expect…

So, you start making your own things. You know those labels that say “Manufactured in a facility that also processes [insert allergen of your choice]”? You would think that making the food in your own house makes you immune to those problems, but it doesn’t. Even buying ingredients and bringing them into your home isn’t always a guarantee. For example, oats are frequently cut with wheat.

It’s a never-stop-worrying sort of problem for a parent. You just carry your Epi-Pens around and hope for the best because there is nothing else that you can do. Thankfully, it is that kind of worry that starts to fade into the background of your mind.

It’s how I imagine driving will be. When they first get their licenses, I will be wild with panic every time they leave the house (much like every time he put something in his mouth). After a while it will become noise I’m used to listening to. I won’t be any less worried, really, I’ll just be so used to it I won’t notice much anymore.

Kind of like making special food for Yoshi—you get used to it and you stop noticing that you’re doing it.