This year has been the year of changes. I largely attribute that to an amazing teacher, an amazing special ed teacher, and an amazing class. The perfect storm of opportunity for him to begin to find his place in this world.

People are noticing. My mom comments on it all the time. He is at my aunt and uncle’s lake house right now and they said something about it almost as soon as he got there. He’s just… better. 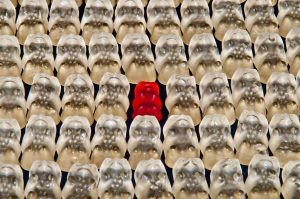 My husband and I were talking about it yesterday. We don’t know what “normal” is for a ten year old. Big Brother has always been ahead of the curve for his age, so we can’t use him as a gauge. Is Yoshi starting to catch his peers? I’m starting to have hope for his future. Hope is a dangerous thing.

Once I fully put the developmental delay theory to bed, I adjusted my vision for Yoshi’s future. What I’m really saying is that once I truly accepted my son’s diagnosis of autism, I let go of any hope I had left. I resigned myself to the idea that Yoshi would never be “normal”. I accepted defeat.

It’s a chicken-or-the-egg kind of situation. Maybe Yoshi didn’t develop as fast as his peers because I didn’t expect him to. If we had set the bar higher, would he have reached for it? If I had a nickel for every time I said, “Yoshi just can’t” (as in “stop expecting him to”), I would have a lot of nickels.

Maybe it’s all my fault.

Or maybe it’s not. I expected things to get worse this year. We stopped behavioral therapy (that’s a story for another day.) We stopped his medication. Things did get worse. Then things got better. A lot better. I didn’t expect that.

I did not reevaluate my expectations for Yoshi’s potential before he started to show me that he is capable of more. He has forced my hand. Look, Mom! Look what I can do! Stop holding me back!

There’s that hope again. It’s creeping back in and that scares me. I carried hope for years that he wasn’t autistic. That he was just delayed and he would catch up. I had almost forgotten about it until I started to collect myself to start this blog.

Yoshi wasn’t just developmentally delayed. He exhibited a lot of classic symptoms of autism. He went into Early Childhood Intervention for other reasons (related to the GI bleed and motor control issues.) He was too young to be diagnosed with autism, but everyone from the intake coordinator to the last therapist we saw with ECI was confident that Yoshi was autistic.

They didn’t say “on the spectrum” back then. Besides, before we put him in intensive speech therapy and got him talking, Yoshi didn’t seem like a high functioning autistic. When he was much younger, the outlook was fairly bleak.

For a few years, I fought.

Almost every doctor we saw (and there were a lot of them) would mention autism at some point. It didn’t matter who they were or why we were visiting them. “Have you considered that your son might be autistic?” Yes. We’ve heard that. He’s not. I was in total denial.

Our pediatrician did not really put it on the table until he split his head open and I brought him into the office to have it glued back together. He did not cry while she did it and for some reason she found that troubling. He did not look at her while she worked and he didn’t cry, despite being restrained with a head wound as a toddler.

When I started this blog I had to go and take down two others that I had up from years ago. One of them was mostly a diary that I did for family called “Keeping up with [Yoshi]” because it got to be too much to constantly update everyone with the latest test results and things. Family and friends just followed the blog for updates on his medical status. I’m glad that I did that because there were a lot of things that I had forgotten.

For instance, the last sentence I wrote on the last post was, “Dr. Wood thinks that [Yoshi] might be autistic. I wish they would quit saying that. I’m really sick of hearing it.” Dr. Wood was one of the last doctors we landed on and I was still fighting the idea.

I literally had not come across a single medical professional (except for the one that could actually diagnose him with autism) who did not think he was autistic. Yet I could not let go of the hope that he was just developmentally delayed. He would catch up. The rest of it was just quirks he would outgrow.

At four, he was diagnosed, officially, by a neurologist—one of the top in the region, nationally recognized for his work with autism. I had to accept it. I had to let go of any hope that I had. He was never going to be “normal”.

For a few years, I fought. Maybe he’ll catch up. I had a couple of doctors show me the graph. The gap would widen. Yoshi would not only be different, he would be more different as he aged. No hope. You learn to live that way. 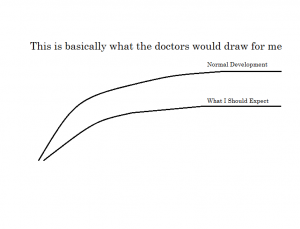 But suddenly, he is changing. Don’t get me wrong—he is still exhibiting many classic symptoms of autism: He can’t read social cues; emotions overwhelm him; he uses spinning still to self-sooth; obsessions, obsessions, obsessions; he gets into repetitive action loops; he cannot handle certain social situations (at all); I could go on all day. The point is that the autism is still there.

He is just learning to live with it. He is talking to people. He is actually interacting with people and having conversations. He is playing with other kids. He is becoming more independent and able to take care of himself in ways I never dreamed of.

Maybe he can have something resembling a normal future. Can you hear the hope? It’s already creeping back into my heart. 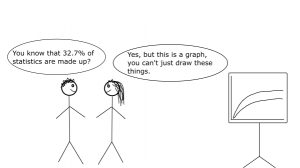